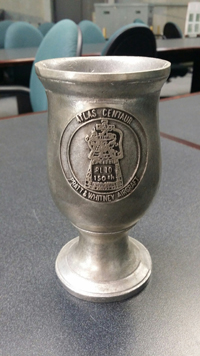 President, Paul Fenley received a very special artifact for Christmas that will reside in his office—a commemorative 150th RL10 Rocket Engine Goblet that dates back to the early 1990’s. This goblet was distributed around the time when Aerojet Rocketdyne (Pratt & Whitney Aircraft at the time) and Atec began their relationship to support the RL10 program. That specific historic launch took place on July 2nd, 1992 and was the 150th RL10 to fly to space. The P2076 (RL10A-3-3A), part of the AC-103 Atlas-Centaur launch, flew in the second position on a dual engine Centaur out of Cape Canaveral, and now that collector’s goblet rests with Fenley. He was very excited to have received this goblet as a Christmas present, and to reflect on the many years of continued relationship between the companies. This important relationship has led to more than 116 successful launches since 1995, with many more to come!

Aerojet Rocketdyne has recently notified Atec that we will very likely be manufacturing the next 60 sets of RL10 cryogenic fuel control valves. Atec worked diligently with Aerojet to streamline our process and help Rocketdyne achieve a major cost reduction for the RL10 program. In today’s push for commercial competitiveness, Atec is proud to have demonstrated our dual commitment to failsafe quality and marketplace affordability.

Atec looks forward to another prosperous and successful year in 2016 for both companies and the incomparable RL10 upper stage rocket engine program. Happy New Year!