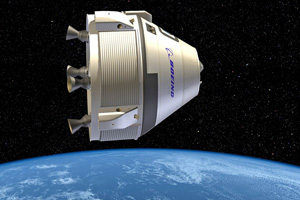 Atec’s space systems group has been awarded a contract to design, manufacture and certify electrical power modules for a commercial crew transportation system. This is Atec’s third contract for this major space prime, and our company is appreciative of the continued, repeat confidence in Atec’s work.

These modules will allow clean power for multi-electrical systems on the CST Starliner-100 crew capsule. Atec is responsible for designing, manufacturing, assembly and test of these electrical units, which will reduce electrical failure risk on the crew capsule. The new capsule will be used to ferry astronauts to and from the International Space Station, and to other destinations in the future.

NASA has awarded the development of the crew capsules to commercial companies, in an effort to break America’s reliance on the Russians for space transportation. The Commercial Crew Transportation Capability (CCtCap) contract is increasing partnerships between public agencies and private aerospace companies, and Atec is excited to participate. The United States’ return to human spaceflight expands our space potential and makes more of the U.S. investment in the ISS.

Atec launched the design phase of the project in late 2015. Atec will then manufacture the units at our Houston-area factory, which will culminate in testing for the rigors of spaceflight. We have the capability and broad support to provide these modules to the new Commercial Crew Capsule, and we understand the critical nature of this project.

Atec is expanding our involvement in commercial space exploration, and is working on space projects for multiple clients, including the Houston Spaceport.