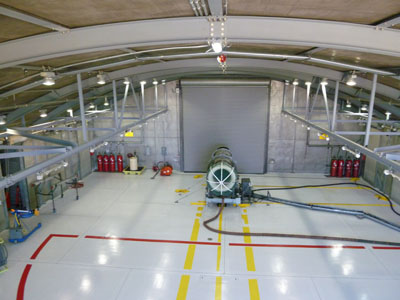 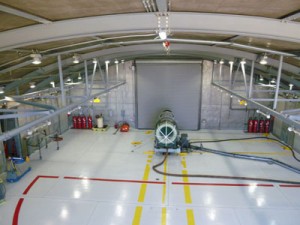 In the old days, your test cell had an engine mount, a few gauges, a few hoses and cables, a start system, a fuel system and a pad of paper, and you were ready to fire up.  However, since the inception of powered flight, engine power and complexity have increased at an exponential rate, especially with the advent of the jet engine in the years after WWII, and then again with the introduction of digital controls.

Enter the economy.  The last few years have wreaked havoc with the aviation industry.  Rising fuel costs have made it even more expensive to operate aircraft.  Specific fuel consumption is now of paramount importance.  Flight readiness of an aircraft—whether for private fleets, military, corporate or commercial air operators—is critical.  If an aircraft is on the ground, it is not performing its mission or making money, plain and simple.   The economics of maintenance have come under increased scrutiny for both the military and commercial sectors.  “Give me the safest, most reliable engines you can for the least amount of money,” has become the standard for MRO.

Enter the environment.  By their nature, Engine Test Cells are not cut out to be nice, earth-friendly neighbors in the community.  No one ever wakes up and says “Gee, I hope we get a turbine engine test cell built next to us, because that would sure help our property values increase.”  Test Cells are smelly, dirty, noisy neighbors full of fuel, oil, and grease—commonly referred to as hydrocarbons—and they literally emit tons of combustion by-products into the air with every engine test.

Enter the FAA and OSHA.   Worldwide guidelines for aircraft safety and the health and safety of maintenance employees have also increased significantly over the past few decades.  Fire systems are rarely simple, hand-held extinguishers anymore, for example, but are fully automated release systems that automatically notify the fire department.  Fire retardant agents have become more expensive as the standard oxygen-depleting fire systems, like Halon, have been deemed environmentally unfriendly.   Control rooms have to allow the personnel inside to carry on conversations to protect users from hearing loss.  These are all good things, but they come with a price tag.

Let’s go back to the economics for a minute. As a test cell, being a good neighbor costs money—lots of it.  Acoustic treatments and environmental containment also drive a tremendous amount of cost into test cells.  As we are all aware, any noisy activity, be it a rock concert or a NASCAR race, is always compared to the noise of a jet engine.  Everyone is geared from birth to think of jet engines as the noisiest thing on the planet.  Test Cells have migrated from outdoor operations to indoor, fully acoustic isolated structures.  A new test cell to test the 100K+ thrust engines that power large commercial jet liners can now cost upwards of $40-50 million dollars.  Building construction and acoustical measures account for over half the cost. Depending on location, another 10-15% of cost can be wrapped up in environmental containment and safety issues.